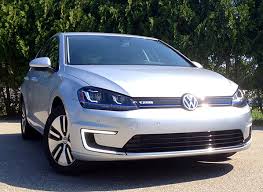 Interested in buying or leasing a sporty 2015 VW e-Golf in  Los Angeles? Galpin Volkswagen has the new VW e-Golf for sale in the greater Los Angeles area.

The 2015 VW e-Golf is a solid choice for anyone who wants to save money at the gas pump. According to the EPA, the 2015 VW e-Golf has a top rating among compact electric vehicles for efficiency. The Volkswagen e-Golf earned a rating of 126 city/105 highway for a combined MPGe of 116. VW says the 2015 e-Golf has a range of 83 miles.

The new e-Golf has a 7.2 kW onboard charger as standard equipment, the EV can be recharged in three ways: 240 volts, which can take less than 4 hours, 110/120 volt, which can take up to 20 hours, or through the SAE standard Combined Charging System (CCS) with fast charging that can bring the lithium ion battery up to 80 percent charge in 30 minutes.